With his portraits – defined sometimes as “aristocratic” because of their elegance and refinement – Modigliani is considered one of the most important artists of the XX century. But like for many other artists of his same period, his life was nothing but simple. Amedeo Modigliani (or Modì, as we also known him) was born in Livorno. His childhood and first youth were characterized by a difficult financiary situation, family problems and bad health. He studied first in Florence and Venice, where he came in contact with drugs and started a dissoluted life, which continued in Paris. Drugs ans alcohol followed him until his death.

His work are easily recognizable for their elongated forms and mask-like faces.  He was known to be fast in painting (he could complete a portrait in one or two sits); those who were portraited by him used to say that Modigliani “undressed their souls”. His style was influenced by many artists like Cézanne and Henri de Toulouse-Lautrèc but doesn’t belong to any artistic current. His portraits give a strong sensation to the whatcher, who often feels hipnotized by their empty eyes and long lines.

Modigliani’s work can be found in many important galleries of modern painting.

In our drawing & painting courses you are encouraged to find your own style, to express yourself. Take a look at our website for more info at www.galilei.it

This marvellous church in central Florence is considered one of the most important pieces of the Florentine artistic evolution, as it was completed by various artists in a long time.  Built upon a first little church called Santa Maria dello Spasmo (of which we can still see the crypt), Santa Trinita (Holy Trinity) was started in a gothic style and was the first Gothic church in Florence (followed by Santa Maria Novella). 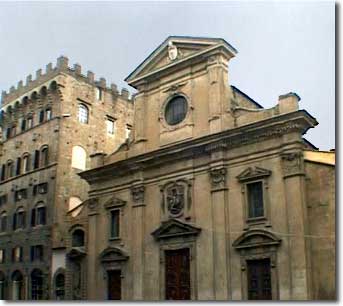 The church was gradually enlarged and enriched and finally in 1300 became an Abbey. In 1500 Buontalenti was asked to modify the presbitery and to rebuild the convent. He’s the author of the Mannerist façade and he created the monumental altar (that was removed in 1800). Then, the cloister was commissioned to Alfonso Parigi il vecchio and some parts of it were added in the following centuries.

Santa Trinita is the mother church of the Vallumbrusan Order of monks founded in 1092 by a Florentine nobleman.

The church counts numerous chapels where you will find many masterpieces; are you interested to know everything about them? Go there with one of our experienced art history teachers! The church can be infact included in our art history programs.

It’s something so beautiful that can happen in Springtime: how many of you have seen a beautiful girl or a handsome boy and it was “amore a prima vista”? That means literally “love at first sight”! Your eyes widen, your heart starts to beat quickly…

but it can happen to girls also when they go shopping…they see a nice dress or a lovely pair of shoes and they literally fall in love with it…so it was “amore a prima vista”, love at first sight!

Take one of our personalized Italian language courses and discover the many Italian colloquial expressions…there are thousands!!!

The beautiful season is wellcoming us with her colourful and juicy fruits! The following recipe is for a delicious crostata with apricots…try to bake it…and you will have a perfect snack for every spring and summer day!

Directions:
Cut the apricots in half and remove the pit. You do not need to peel apricots as the skin is very delicate and will blend into the filling. Coarsely chop. In a heavy pan mix the chopped apricots and sugar and cook for about 5 to 7 minutes until the fruit has softened and begun to break down. Add the amaretto liqueur and apricot jam and mix well.

Mix together the butter and sugar with a hand mixer until well blended. Add the egg and egg yolk and continue to mix just until smooth. In a separate bowl, mix the flour, cornmeal, salt, walnuts, baking powder and cinnamon. Add the dry ingredients to the butter mixture and mix just until the dough comes together.

Preheat oven to 375 degrees F. Take about 3/4 of a cup of the dough mixture and set it aside. Press the remaining dough into the bottom and up the sides of a 10 inch tart pan with a removable bottom. Spoon the apple mixture into the crust and use a spoon to smooth across the bottom crust. Mix the almonds into the remaining dough, and using your fingers, break up the remaining crust mixture into small pea sized pieces and drop it across the top of the tart. Do not worry that it doesn’t cover completely as it looks more rustic this way!

Bake the tart in the preheated oven for about 25 minutes or until it is lightly browned. Remove from the oven and allow to come to room temperature before serving.

Take one of our Italian cooking courses! You’ll be surprised by the many recipes you’ll be able to learn!

Italian is the 19th more spoken language in the world: 62 millions people knows it as mother tongue, and 120 million people knows it as second language. It is used often for commercial reasons, as Italy is both importing and exporting goods from and to many countries.

As we all know, modern Italian is an evolution of the Florentine dialect, and is one of the 23 official European languages. But why is it so important? Let’s see in how many places  is spoken!

In Switzerland is one of the three official idioms (with French and German).

In Brazil is recognized as “ethnic language ” of the poeople of Santa Teresa and Vila Velha in the Espirito Santo’s state, where is taught as obligatory second language at school.

In France, Italian is spoken in the Nice area and in Monaco.

You can find Italian speakers also in Albania and Montenegro, because of the many relations these countries have toghether, as well as in Dalmatia.

Italian is diffused in the African ex-Italian colonies such as: Lybia, Ethiopia, Eritrea and Somalia.

Because of the emigration, Italian has a significative presence in the USA, Argentina, Venezuela, Uruguay, Germany and Australia – where it is often spoken at home as a second language.

So what are you waiting for? Come and learn it at the Institute Galilei!