Located in the Oltrarno, the part of the town across the river, this square is known all over the world for the magnificent view of the city landscape it offers – which is in fact reproduced in many postcards. 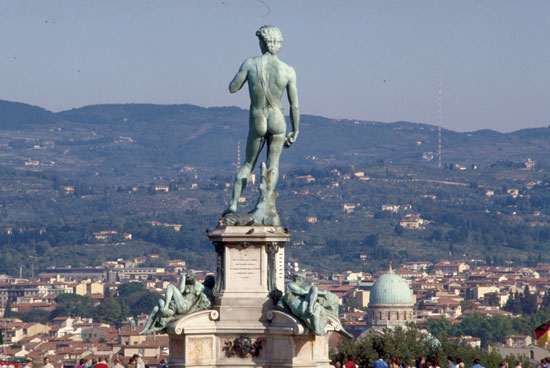 Designed by Giuseppe Poggioni, the square was buit in 1869, during the urban renewal of the town. Florence was the capital of Italy and during that period, the middle class strongly wanted to show its strong rebirth; there were created lungarni; on the right bank, instead of the fourteenth-century walls were open the avenues of the ring of a boulevard, on the left bank was traced, wind on the hill of San Miniato, the Viale dei Colli, a street tree overview 8 kilometers long, at whose climax the square was built as a terrace with a panoramic view inside the city.

The Michelangelo square, dedicated to the great Renaissance artist Michelangelo, has copies of some of his famous works in Florence: the David and the four allegories of the Medici Chapel of San Lorenzo. These copies are made of bronze, while the originals are all in white marble. The monument was brought up by nine pairs of oxen on 25 June 1873.

Poggi designed the loggia in the neoclassical style that dominates the whole terrace, which today houses a panoramic restaurant. Originally it was supposed to house a museum of works by Michelangelo, ever.

The view shows the heart of Florence from Forte Belvedere to Santa Croce lungarni through the bridges of Florence and in sequence, especially the Ponte Vecchio, are the Duomo, Palazzo Vecchio, the Bargello and the octagonal bell tower of the Badia Fiorentina, without forgetting opposed to the hills north of the city with the center and Settignano Fiesole. The square can be accessed by car along the tree-Viale Michelangelo, made in those same years, or walk the stairs going up the ramps of the monumental Piazza Poggi Poggi in the district of San Niccolò.