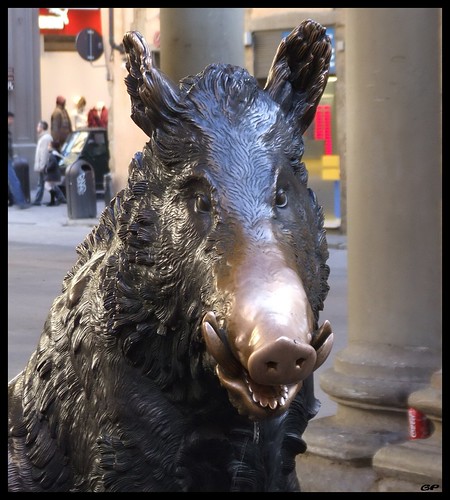 La “Loggia del Porcellino”  – that means literally “The lodge of the piglet” – it’s a 16th century lodge, located just in the way between Piazza della Repubblica and Ponte Vecchio.  As we can understand from its official name, “Loggia del Mercato Nuovo”, its function was – and still, is – the sale of goods. Walking there, you will be captured by the thousands of colours of the exposed bags, scarves and lots of other things.

But let’s talk about the funny piglet that you can see right in front of the building. This bronze wild boar is a reproduction of an Hellenistic statue which is in the Uffizzi, signed by Pietro Tacca. The piglet is a real touristic attraction, Wikipedia explains the reason:

“Popular tradition has it that rubbing the nose brings fortune, so that the statue has acquired over time a certain shine in that spot. Visitors are encouraged to place a coin in the mouth of the boar after rubbing its nose, and superstition implies that the wish will be granted if the offering tumbles through the grate whence the water flows.”

This place of interest can of course be included in one of the Institute Galilei’s guided tours of Florence.  Good luck, then!