Curious Florence: Florence and the Explosion of the Cart

Among the most characteristic Easter events in central Italy is the Explosion of the Cart in Florence, Tuscan Capital and UNESCO World Heritage Site since 1982.

The celebration dates back to the First Crusades, undertaken to liberate the Church of the Holy Sepulchre from the hands of the “infidels.” 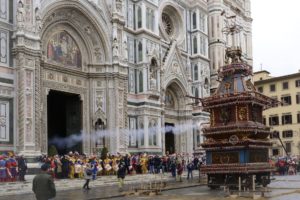 Legend has it that a Florentine crusader that was the first to climb the Jerusalem walls was gifted with three splinters of stone from the Church; today they are held inside Florence’s Church of the Holy Apostles.
According to historians, once the crusaders liberated Jerusalem (on Black Saturday, no less), they gathered in the Church of the Resurrection to receive the “holy fire,” symbol of purification.

The Florentines’ Easter customs go back to this very ceremony: that is, the Florentines’ tradition has long been to go to the Church of the Resurrection and light a small torch of holy fire with the sparks that emit from the rubbing together of the stone flints. At such a point they undertook a procession through the city to then take the holy fire to each house.
In time the ritual came to include transport of the holy fire (burning coals) by cart. It was in the 14th Century that fireworks were thrown in the mix, resulting in the “Explosion of the Cart.” 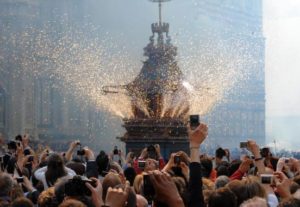 White oxen led the car from Piazzale del Prato to Florence’s Church of the Santissimi Apostoli, while a dove (in reality, a bird-shaped flare) sets fire to the fireworks in the cart.

The mechanism in detail involves a cord that runs the length of the Church, from its choir to the cart outside the church entrance. The dove flare slides along the cord, and bounces off the cart, thus setting off the fireworks before returning backwards on its own.
It is said that if the explosion goes off without a hitch and the dove makes its return to the altar unimpeded, it is a good augur for Florence for the rest of the year. The tradition is always a big draw for tourists, citizens and, especially in the past, inhabitants of rural areas that based their hopes and fears regarding harvest, flooding, etc. on the dove’s success. In fact, the devastating flood that hit Florence in 1966 coincided with the fact that the dove had not returned to the church altar.

If you want to learn more about Italian traditions and cultures, take a look to our culture courses!