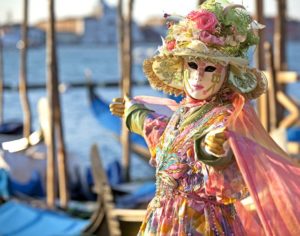 February in Italy means that just about every city on the Peninsula is invaded with masks, confetti, colors and lights that make for a very exciting and unique atmosphere: it’s Carnival! It is a party with ancient roots, and today has become a folkloristic rite in which traditions and fun work together to bring enormous life to this unique celebration. 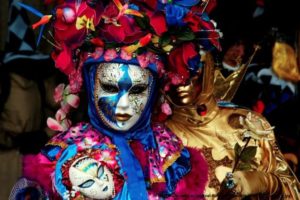 Of course the protagonist of Carnival is the costume or disguise, the mask that allows those who don it to transform themselves into whomever they wish to be – at least for a few days. The origins of Carnival date back to the Roman Saturnalia festival that rang in the new year (Julian calendar) – similarly to the Lupercalia and Dionysian feasts. The actual term “carnevale” however derives from the Latin “carnem levare” for “take away the meat”: indeed, in Antiquity the term indicated the banquet held the last day before the period of abstinence from meat, i.e. the Christian Lent. Carnival, according to the Roman Catholic Liturgical Calendar, is set for between Epiphany (January 6th) and the start of Lent. 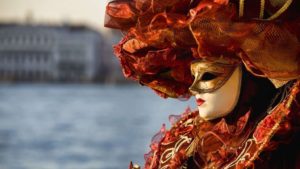 Initially a feast characterized by unrestrained enjoyment of food, drink and sensual pleasures, and granted as a temporary escape for the lower classes – an opportunity to upend and subvert norms, especially in the way of social order – through the arc of time Carnival spread throughout the world and took on ever-novel shades and nuances, mutating into a singular form of entertainment and merrymaking. From north to south, Italy marks Carnival with long standing traditions that are internationally-known, and that attract thousands of visitors from around the world this time every year.

Would you like to discover more about Italy and its culture? Check out our Italian culture courses!