Eugenio Montale was a poet, journalist and Italian critic who was awarded of the Nobel price in 1975.

Despite his technical studies, he always showed a special attraction to writing and reading; in his young ages, he used to spend the great part of his time between the many libraries of his town, Genova, and also used to follow the University’s philosophy lessons with his older sister. 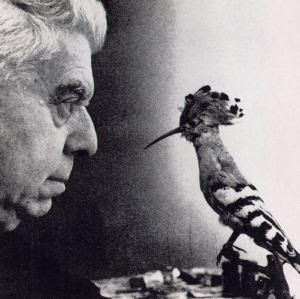 Montale was a self-taught man; he took inspiration from many Italian previous writers, such as Dante Alighieri, and the places of his life (the Levante, eastern Liguria) were so important in his formation.  During the World War I, he asked to be sent to the front but came back just after one experience.

He didn’t write many works but all of them are very intense. Most of his writing life was devoted to the newspaper Corriere della Sera. He came in contact with some Hermetic poets, but wasn’t an Hermetist. The raise of the fascist regime higly influenced him, who felt detached from contemporary society and found refuge in the solitude of nature, a fact that can be easily recognised in his first poetry collection, Ossi di seppia (Cuttlefish bones). his later works were more dry and ironic. Following, one of his poems:

Bring Me the Sunflower

Bring me the sunflower so I can transplant it
here in my own field burned by salt-spray,
so it can show all day to the blue reflection of the sky
the anxiety of its golden face.

Darker things yearn for a clarity,
bodies fade and exhaust themselves in a flood
of colors, as colors do in music. To vanish,
therefore, is the best of all good luck.

Bring me the plant that leads us
where blond transparencies rise up
and life evaporates like an essence;
bring me the sunflower sent mad with light.

Montale became famous all over the world and gained honorary degrees by the University of Milan, Cambridge, Rome, and has also been Senator-of-life in the Italian senate.