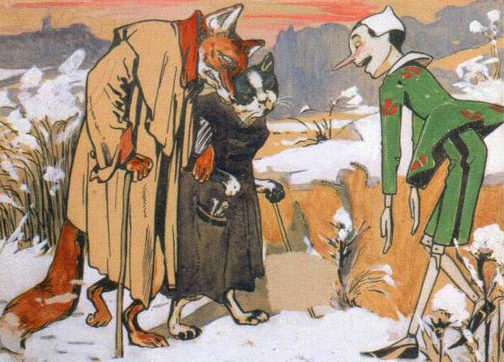 Pinocchio: the true story of the wooden puppet

Pinocchio: the true story of the wooden puppet

“A boy who won’t be good might just as well be made of wood…”, said the kind Blue Fairy in Walt Disney’s 1940 film production of Pinocchio. The puppet’s very name triggers some familiar images; the nose that grows when he tells a lie, the wise Jiminy Cricket, and lots of wishing on stars. He naively traverses through a world of temptation and deceit on his pursuit of boyhood. Whilst Disney’s happily-ever-after version has dominated our perception of this wooden puppet, the original story of Pinocchio takes on quite a different nature.

It was Florentine-born Carlo Collodi (1826-90) who wrote the children’s novel, The Adventures of Pinocchio: The Story of a Puppet in 1883, which tells of the wooden marionette’s mischievous adventures with Gepetto – his poor woodcarver father – and an assortment of other fairy tale creatures. Collodi, with a career writing as journalist and then his own novels and stories, sent a short snippet about a wooden puppet to an editor friend in Rome, with the unlikely expectation he might be interested in publishing it. It ended up being serialised in the Giorniale per i bambini, and children everywhere became infatuated with Pinocchio and his wild encounters. The book itself is

0 languages, making it the most translated non-religious book in the world.

To clarify some key differences between these two depictions of the story, and burst the Disney bu

bble, it must be known that in Collodi’s original version, the talking cricket has a rather short-lived appearance, being killed by Pinocchio after attempting to admonish him. Pinocchio’s personality is also more aggressive and selfish, and the consequences of his mischief and lies were intended as a cautionary tale for children against disobedience. Collodi’s original series even concluded with the puppet left hanging to death from an oak tree by his heinous foe

s, the Fox and the Cat. Despite being a sure-fire warning against bad behaviour, it left fans in a state disappointment and mourning for their beloved puppet, and Collodi was forced to resurrect him and continue the stories. Yet, like many Tuscan folk tales, Pinocchio’s adventures are unequivocally embedded with other moral teachings of familial love, 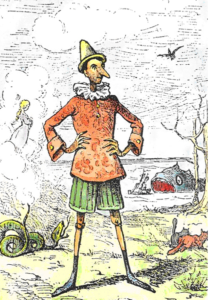 honesty and the importance of hard work, granting it the legendary status it has held for over a century.

So, if you ever pass by Florence’s various wooden puppet shops, particularly Bartolucci on Via della Condotta, think of Pinocchio and his trickster ways, and be warned to never tell a lie

If you want to know more about Pinocchio story or other Italian novels and authors, check our Italian literature courses!