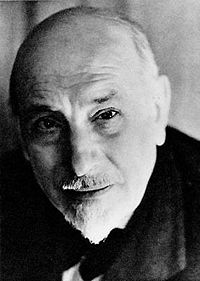 Luigi Pirandello was an Italian dramatist, novelist and short story writer awarded of the Nobel Prize in 1934.

Born in an upper-class family in the curious village of Kaos (Chaos) in Sicily, he begun his career as a narrator. After meeting Luigi Capuana, o theorician of the literature current called Verismo, he started writing novels on the veristic model, which were published in a volume called Novelle per un anno. Among his novels, the most importat is of course The late Mattia Pascal (Il fu Mattia Pascal, in Italian), written in 1904. The story tells the life of a business man, who after winning a lot of money in a casinò, goes far from his wife and family and is believed dead. His fortune becomes tragedy when, after losing all his money and documents, he wants to have his old life back: in fact his wife, believing he was dead, has now another husband and not having any document the authorities tell to Mattia that he doesn’t exist. To whom asks him who actually he is, he can’t answer nothing but “I’m the late Mattia Pascal”.

The message of this masterpiece strongly shows Pirandello’s philosophy: nothing is sure in our lives, the reality is not absolute but relative, and so is the man, who should not think to have just one personality.